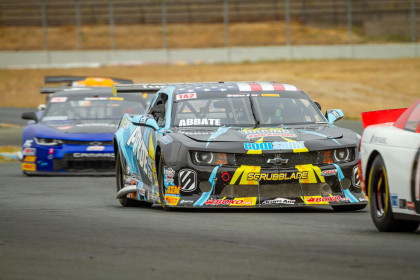 Michele Abbate is a Las Vegas native, professional race car driver in the TransAm TA2 series, a 4x Road Racing Champion and the first female to ever finish on the podium in the Trans AM TA2 series.

"She initially got her start at 16 in her local Sports Car Club of America (SCCA) autocross events and worked her way up the motorsports ladder into track days, time attack, and then on to earning her racing licenses. Michele became a factory backed driver for Scion Racing immediately after her graduation from the University of Nevada – Las Vegas (Bachelor’s degree in Communication and minor in Marketing) and established her motorsports marketing company Grr Enterprises, LLC and her race team, Grr Racing. Michele began club racing in 2013 and made her debut in the SCCA National RunOffs Championships in 2018, where she became the youngest female to earn a podium finish in the GT-1 class."